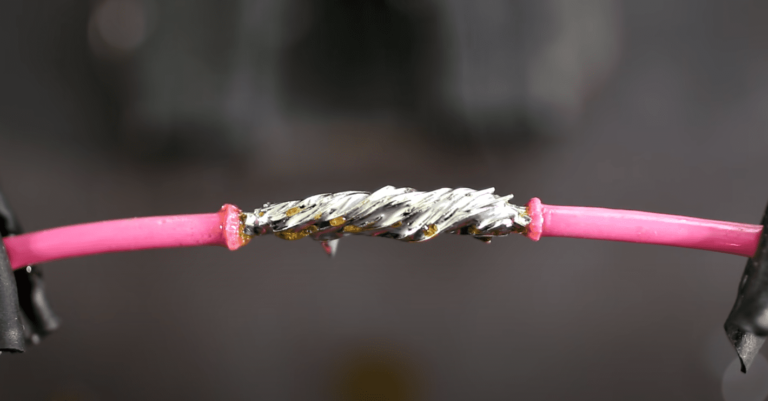 Alternatives to Soldering: Everything You Should Know

With the rise of electronics and the fall of manufacturing, there has been an increased demand for alternative methods of joining metals. This is due to the fact that soldering, while effective, can be time-consuming and expensive. There are a few different methods that can be used in place of soldering, each with their own advantages and disadvantages.

Contents show
1 Use of Conductive Adhesives
1.1 Conventional Conductive Adhesives
1.2 Electrically Conductive Adhesives Using Nanoparticles
1.3 Disappearing Liquid Phase Adhesives
2 Use of Structures With Built-in Elements
2.1 Freescale’s Solution – A Chip Body With Pin Reallocation
2.2 Solution From Imbera – Integral Module Board
2.3 Ge’s Solution – On-Chip Buildup
2.4 The Solution From Verdant Electronics – Occam’s Process
3 Technology for Forming Interconnections and Using Diamond Particles
4 Types of Alternative Tools for Soldering
5 Battery-Based Soldering Device
6 Soldering Iron From a Lighter and a Paper Clip
7 Special Alloy for Soldering Without a Soldering Iron
8 FAQ
8.1 How to attach a wire without soldering?
8.2 Can you use a paperclip as solder?
8.3 Can you use electrical tape instead of soldering?
8.4 Can you use glue for electronics instead of solder?
8.5 Can you use aluminum foil as solder?
9 Related Video: How to Solder Without Soldering Iron
10 Final Words

Use of Conductive Adhesives 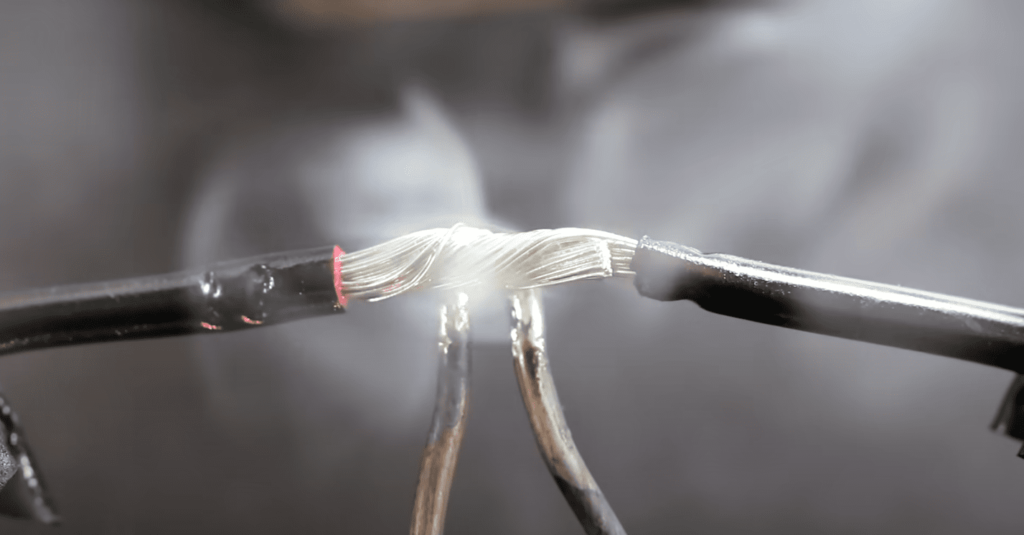 Among the advantages of conductive adhesives over traditional solder joints are:

Despite the advantages of conductive adhesives technology, their widespread use in the electronics industry has been limited due to lower specific conductivity than solders, low impact resistance and concerns about the long-term stability of electrical and mechanical properties.

The electrical conductivity of traditional conductive adhesives is limited by the contact resistance between the filler particles. With the introduction of nanoscale fillers, electrical conductivity is increased through a combination of several mechanisms, including more efficient filler compaction and easy sintering of the particles to form a highly conductive mesh. Because of the tendency of nanoparticles to form clusters for practically applicable conductive adhesives based on them, their effective and uniform distribution plays a critical role. 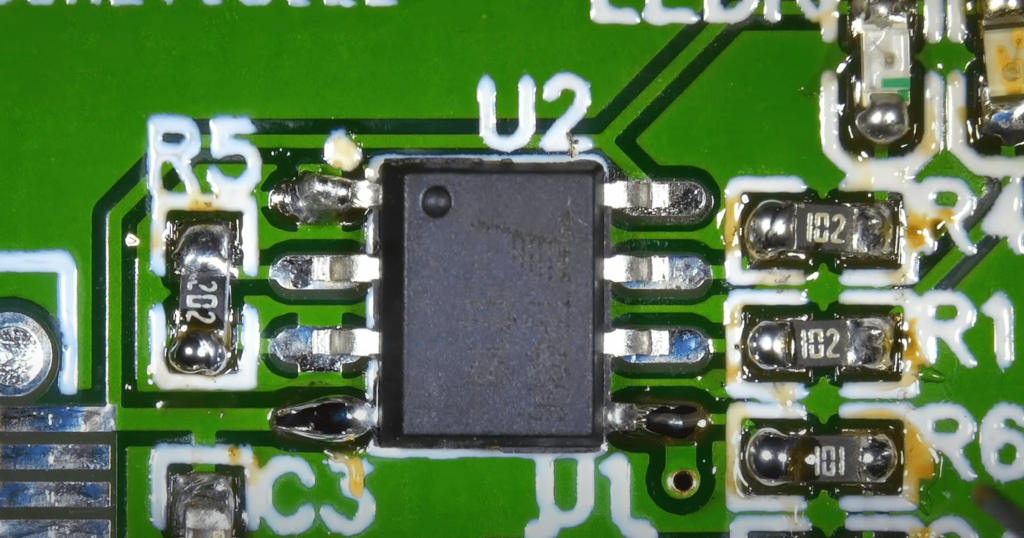 Researchers at Endicott Interconnect Technologies have shown that the use of nanoparticle-filled adhesives made of copper, silver and fusible alloys when co-pressed can improve the interconnection density of component housings and printed circuit boards on organic substrates.

Often conductive meshes in isotropic conductive adhesives are formed by silver flakes. The total circuit resistance is determined by the resistance of the scales and the contact resistance between them. The addition of nanoparticles allows the formation of additional bridges between the particles, which can increase the density of the conductive mesh connections and reduce the overall resistance.

Use of Structures With Built-in Elements

In addition to advances in solderless connection materials, assemblies with embedded components use traditional materials in new ways, eliminating the need for wire-welding and solder pins to improve performance by reducing interconnect parasitic phenomena and increasing reliability. 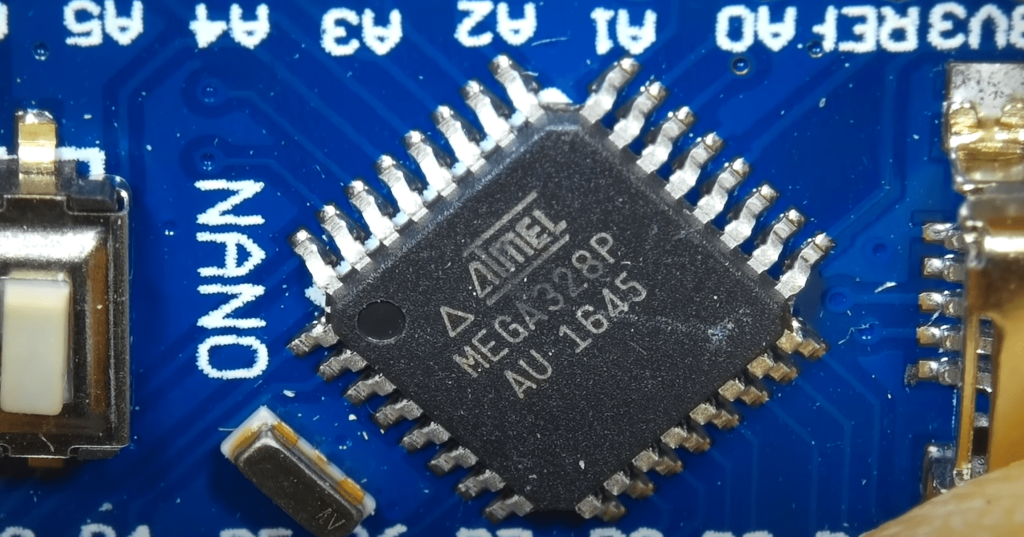 A variety of ways to create products with embedded active components are being developed and implemented by companies such as Freescale, Imbera, GE, Verdant, and many others.

RCP is designed for System-in-Package (SiP) applications for mobile electronics. The absence of wire-welding and Flip Chip pins improves electrical performance and expands miniaturization capabilities. RCP packages and similar packaging technologies with embedded crystals are completely changing traditional supply chains, taking the bare crystal to the interconnect stage. Since 2008, Freescale has shipped a number of products that use RCP technology.

Solution From Imbera – Integral Module Board

In the Imbera integrated modular board, active and passive devices are embedded in a board based on organic material by installing an unmolded crystal when the conventional PCB layer package is pressed together. After pressing, micro vias and through holes are drilled and metallized. The crystal connections have a Cu/Cu or Cu/Au structure with no bonding component.

Target applications for this technology include systems-in-package (SiP) and systems-in-board for advanced consumer electronics. The IMB solution, based on traditional printed circuit board technologies, achieves medium to low electrical performance and reduced size, but is expected to offer significant economic advantages and good compatibility with manufacturing infrastructure.

GE promotes ECBU technology for applications such as microprocessors, video processors, and specialized integrated circuits with high interconnection and thermal requirements. The absence of wire-welding and Flip Chip pins provides excellent electrical performance and opens up the possibility of very high interconnection densities. Some re-engineering of the existing packaging and supply chain process infrastructure is required to perform the flip chip installation in the ECBU switching structure. Technical evaluations of the ECBU solution currently being conducted by leading microprocessor and GPU vendors indicate significant performance advantages of this technology.

Verdant’s Occam process consists of placing pre-tested and primed components on an adhesive layer of temporary or permanent substrate. After the components are poured, the adhesive layer is removed at locations above the component pins mechanically or by laser ablation. Finally, the switching structure is formed by metallizing the holes and forming conductors of copper.

Another alternative to soldering is the interconnection with diamond particles. Originally developed for automated testing, this method provides low contact resistance with little damage.

The low contact resistance is achieved here by an irregularly shaped solid particle on the contact pad surface. This particulate surface easily pierces the mating mounting substrate, even if it has a non-conductive oxide layer and adhesive.

Particle interconnection technology has significant potential as a replacement for soldering in a variety of applications such as LED product assembly and printed electronics.

Mounting LED components to enclosure bases is often done by soldering. However, solder can short the p-n junctions of LEDs due to the lift on the sides of the component. Analysis of the method of making interconnections using particles in combination with a non-conductive adhesive has shown that diamond particles with a nickel coating provide improved electrical and thermal conductivity without the risk of shorting the p-n junction.

Types of Alternative Tools for Soldering

One of the best alternatives that can replace a soldering iron for professional use is a torch. It can be gas, gasoline or other fuels. The main advantage of such a replacement is the relatively low speed of operation. Burners are used in jewelry and in some other areas. Due to the wide flame flow that comes from the torch, it is difficult to use it for working with chips, but connecting wires and other contacts is also quite possible.

A heat gun is also used in the same way as a torch. But this tool is more suitable for universal soldering, because its thermal flow is narrowly directed. These products are mass-produced and widely used in a professional environment. There is a huge selection with parameters for different purposes.

The simplest methods at home include using an iron, a heated nail or a piece of copper wire, which will be analogous to a soldering iron tip. All of these are not a full-fledged replacement, but for a one-time soldering procedure is fine and can provide a decent connection.

One of the options for replacing the soldering iron at home for microchips is a homemade tool. The homemade battery-powered device allows you to do even complicated soldering jobs. Thanks to the presence of an auxiliary power source, it does not have to be plugged in, so you can use it in any convenient places.

To make such a soldering iron you will need the following tools:

If we look at everything from a purely technical point of view, the connection using a battery-based soldering iron is not considered soldering, but welding. To make it, you need to take two wires and wind a few turns of solder on top. It is desirable to use such solder, which has rosin inside. One of the battery electrodes should be connected to the soldered products. The second electrode is connected to the graphite rod.

After all connections are made, the solder should be quickly touched and the contact broken. This will create an electric arc that will melt the material and it will form a secure unbreakable bond.

This technique may be suitable when the technician is looking for a substitute for a headphone soldering iron or any other tool for soldering thin wires. It is not suitable for thick materials.

Soldering Iron From a Lighter and a Paper Clip

Another option of what to use instead of a soldering iron is a homemade tool from a paper clip and a lighter. To create it, you will need:

One paper clip has to be completely unfolded. Its end should be straight. The paper clip is attached in a pair of pliers, so that the craftsman does not get burnt when heated. The end of the product is heated with an autogenous lighter. The flame must be stable and constant to maintain the desired temperature at the same level.

This method is suitable for working with tin, as the flame of the lighter will be enough to reach its melting point. When the paper clip is red-hot, it can be used with tin. Such a simple “tool” can even be used to solder microchips, as its sting turns out to be quite thin. To solder the wires, you have to put them together and then put a piece of solder on them and heat it with a red-hot paperclip so that everything is soldered.

The complexity of the job is only in maintaining the right temperature at all times. For small jobs it’s hard to find an easier way. There are practically no difficulties with mastering such a tool. All fine work can be done extremely quickly. In the absence of a lighter, it is worth using other sources of flame. The main thing is to choose the right temperature.

Special Alloy for Soldering Without a Soldering Iron

There are also options that help answer the question of what to replace the soldering iron and tin at the same time. Using special alloys is great for working with small parts. It consists of lead and tin. You don’t need a soldering iron to solder with it, but you need to do surface preparation before you start.

With a file or sandpaper you need to clean the working surface of possible dirt and oxide film. Then it should be treated with chloride zinc, applying the composition with a brush. When the preparatory work is completed, it is necessary to take the necessary amount of alloy and put it on the surface area of the part to be joined. Next, you need to take any source of flame and heat the joint where the composition is located.

When it comes to soldering wires, it is advisable to additionally use rosin along with the alloy. An alcohol solution of this flux is enough to improve the quality of soldering. Working with different materials may require additional fine nuances, which will already be seen during the work.

How to attach a wire without soldering?

There are a few ways to attach a wire without soldering, including using twist-on wire connectors, heat-shrink tubing, and electrical tape.

Can you use a paperclip as solder?

No, you cannot use a paperclip as solder.

Can you use electrical tape instead of soldering?

Yes, you can use electrical tape instead of soldering. However, it is not as durable and may not last as long.

Can you use glue for electronics instead of solder?

No, you cannot use glue for electronics instead of solder.

Can you use aluminum foil as solder?

Related Video: How to Solder Without Soldering Iron

There are many alternatives to soldering that can be used depending on the application. Each of these methods has its own advantages and disadvantages that should be considered before deciding which is best for a particular application.