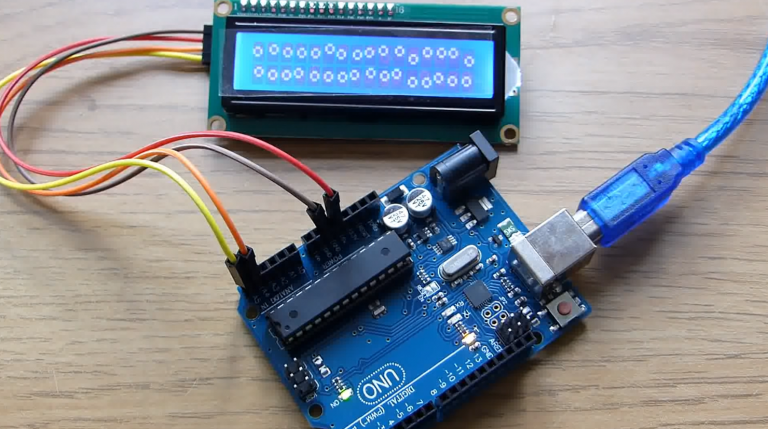 The LCD is a frequent guest in Arduino projects. But in complex circuits, we may have a lack of Arduino ports due to the need to connect a screen with many pins. The way out in this situation can be the I2C/IIC adapter, which connects the almost standard Arduino 1602 shield to the Uno, Nano, or Mega boards with only four pins. This article will see how you can connect the LCD screen with an I2C interface, what libraries can be used, write a short example sketch, and break down typical errors.

Contents show
1 Arduino LCD 1602
1.1 Short Description of the LCD 1602 Pins
1.2 Diagram of LCD Connection to Arduino Board Without I2C
2 Description of the I2C Protocol
3 I2C Module for the Arduino LCD 1602
4 Connecting the LCD Screen to the Arduino via I2C
5 Libraries for Working with the I2C LCD
5.1 Alternative Library for Working with I2C Display
6 Problems Connecting the I2C LCD
7 Conclusion

The LCD 1602 Liquid Crystal Display is a good choice for displaying character strings in various projects. It is inexpensive, there are different backlight colors, and you can easily download ready-made libraries for Arduino sketches. But the most important disadvantage of this screen is the fact that the display has 16 digital pins, of which at least six are mandatory. So using this LCD screen without i2c adds serious limitations for Arduino Uno or Nano boards. If the pins are not enough, you will have to buy an Arduino Mega board or save the pins by connecting the display via I2C, among other things.

Short Description of the LCD 1602 Pins 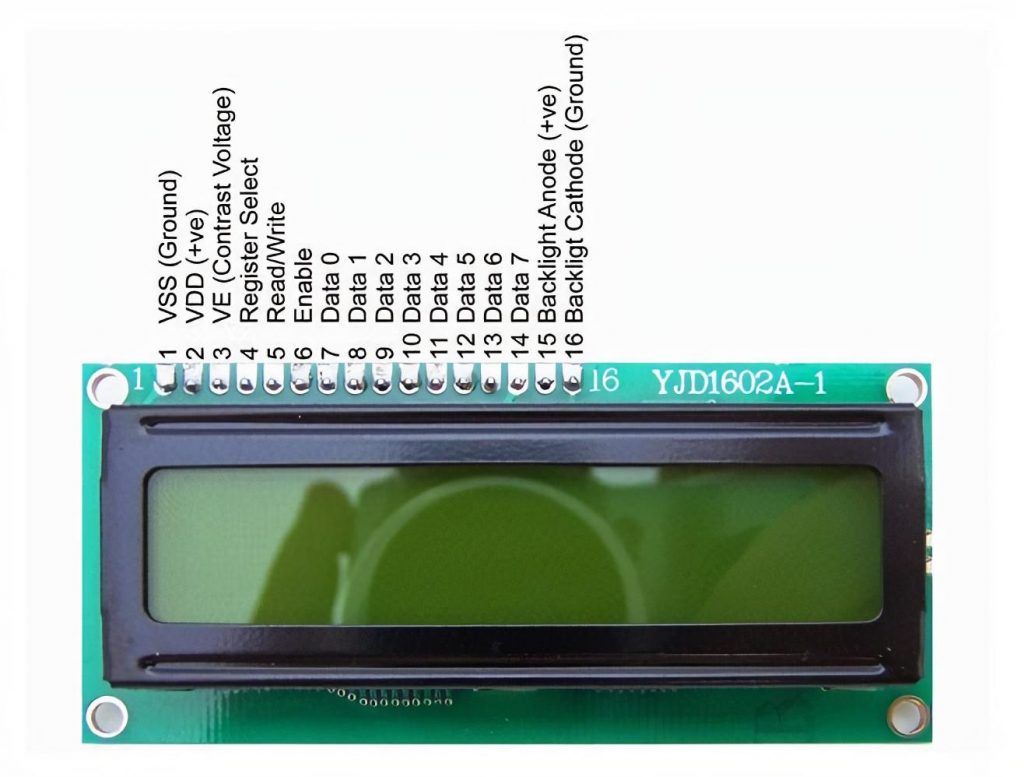 Each of the pins has a different function:

Diagram of LCD Connection to Arduino Board Without I2C

The standard circuit for connecting the monitor directly to an Arduino microcontroller without I2C is as follows. 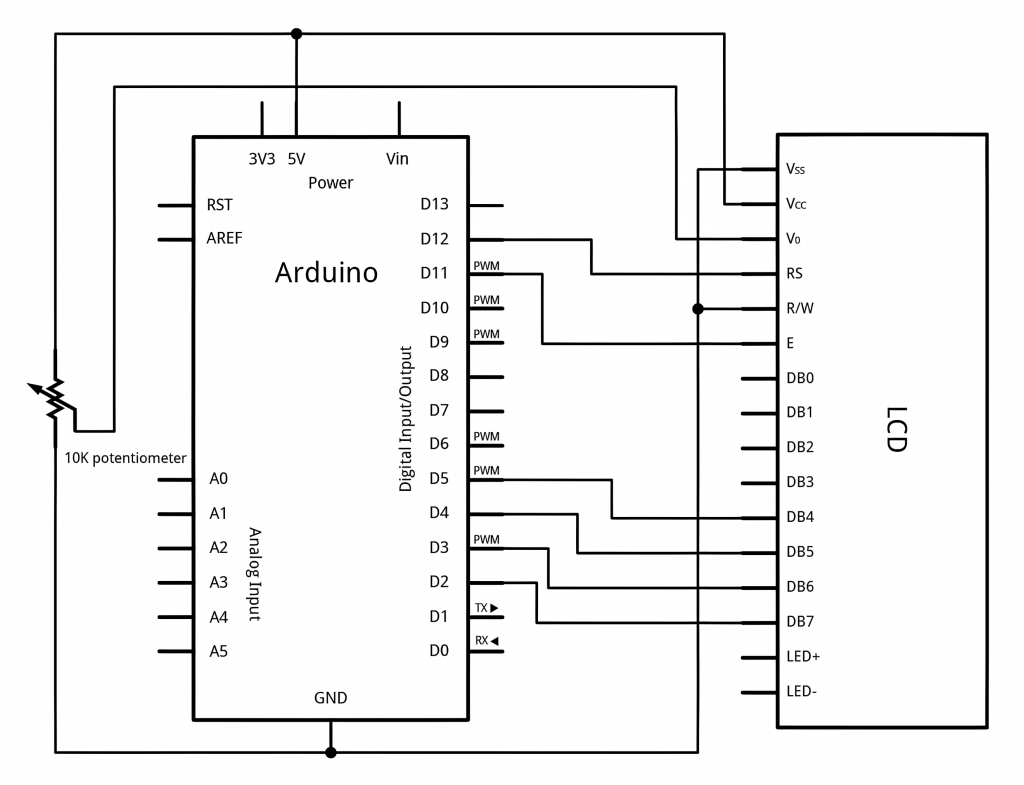 Description of the I2C Protocol

Before discussing connecting the display to the Arduino with an i2C adapter, let’s talk briefly about the i2C protocol itself.

I2C/IIC (Inter-Integrated Circuit) – is a protocol originally created to communicate integrated circuits in an electronic device. The development belongs to Philips. The i2c protocol is based on an 8-bit bus, which is needed to link the blocks in the control electronics, and an addressing system that allows you to communicate on the same wires with multiple devices. We simply send data back and forth to one device or the other, adding the desired item’s ID to the data packets.

The simplest I2C circuit can have one master device (most often an Arduino microcontroller) and several slaves (such as an LCD). Each device has an address in the range of 7 to 127. There must not be two devices with the same address in one circuit.

The Arduino board supports I2C at the hardware level. You can use pins A4 and A5 to connect devices using this protocol.

There are several advantages to I2C operation:

The fastest and most convenient way to use the I2C display in the Arduino is to buy a ready-made screen with built-in protocol support. But there are not many of them, and they are not cheap. But a variety of standard screens have already been released in huge numbers. Therefore, the most affordable and popular option today is to buy and use a separate I2C module – adapter, which looks like this: 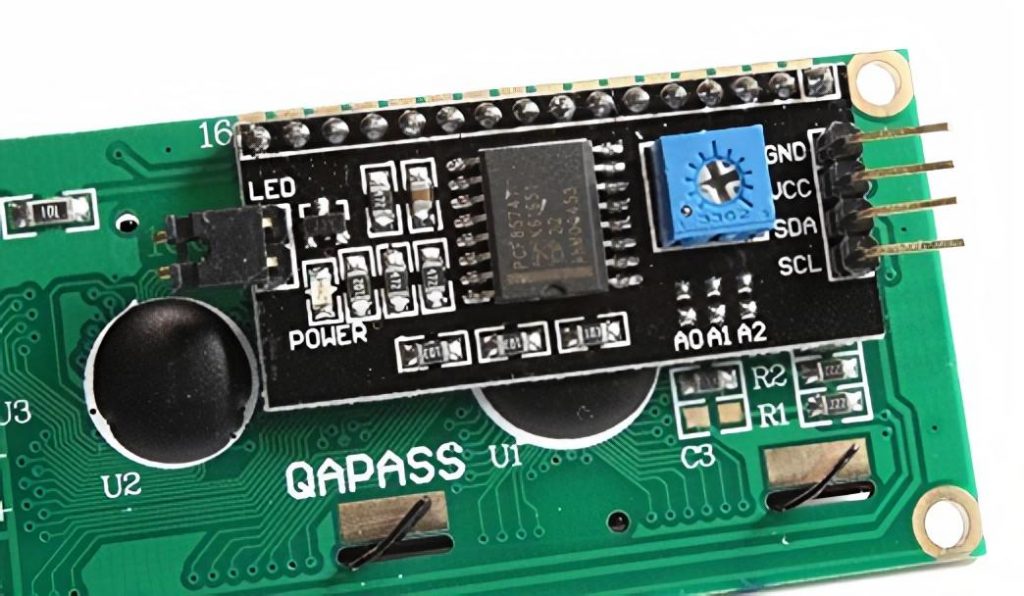 On one side of the module, we see I2C pins – ground, power, and 2 for data transfer. On the other side of the adapter, we see external power connectors. Of course, there are many pins on the board, with which the module is soldered to the standard pins of the screen.

The i2c outputs are used to connect to the Arduino board. If needed, we connect an external power supply for the backlight. With the built-in trim resistor, we can adjust the adjustable contrast value J.

You can find LCD 1602 modules with already soldered adapters on the market, and they are as simple as possible to use. If you bought a separate adapter, you have to solder it to the module beforehand.

Connecting the LCD Screen to the Arduino via I2C

To connect, you need the Arduino board itself, the display, a breadboard, connecting wires, and a potentiometer.

If you use a special separate I2C adapter, you need to first sell it to the screen module. It’s hard to make a mistake there, and this diagram can guide you. 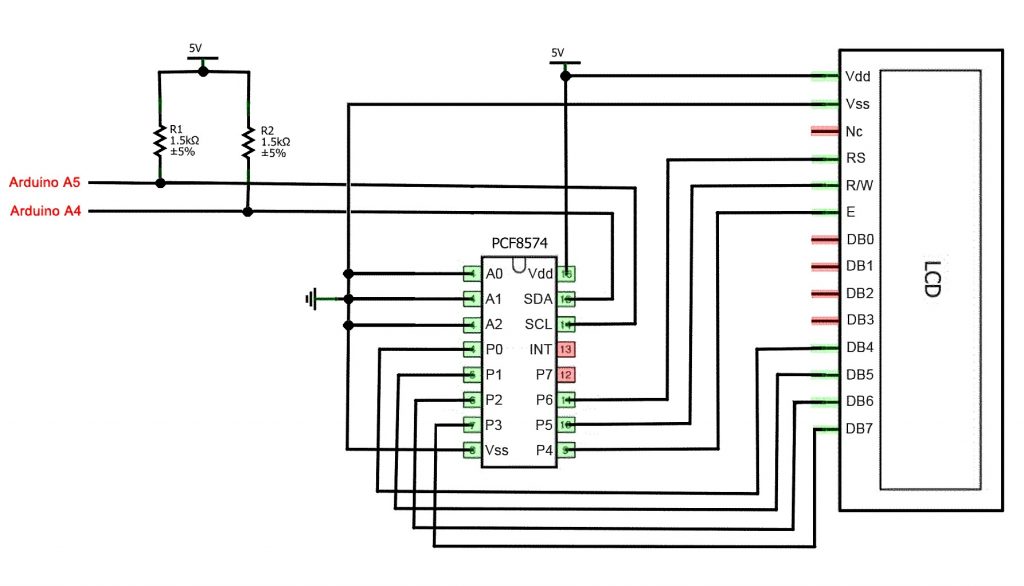 And that’s it! No cobwebs of wires that are very easy to get tangled in. That said, we can simply leave all the complexity of the i2C protocol implementation to the libraries.

Libraries for Working with the I2C LCD

To interface the Arduino with the LCD 1602 via the I2C bus, you need at least two libraries:

After connecting all the necessary libraries to the sketch, we create an object and can use all its functions. For testing, let’s load the following standard sketch from the example.

Description of functions and methods of the LiquidCrystal_I2C library:

In some cases, when using the above library with devices equipped with PCF8574 controllers, errors can occur. In that case, you can offer as an alternative to the library LiquidCrystal_PCF8574.h. It extends LiquidCrystal_I2C, so you shouldn’t have any problems using it.

If you don’t get any writing on display after loading the sketch, try the following steps.

First, you can increase or decrease the contrast of the monitor. Often characters are just not visible due to the contrast mode and backlighting.

If this does not help, then check if the pins are connected correctly and if the backlight power is connected. If you used a separate I2C adapter, check the quality of the solder pins again.

Another common cause of missing text on the screen can be a wrong I2C address. Try changing the device address from 0x27 to 0x20 or to 0x3F. Different vendors may have different default addresses. If this does not help, you can run the I2C scanner sketch, which looks through all connected devices and detects their address by brute force.

If the screen still does not work, try to unsolder the adapter and connect the LCD normally.

This article covers the fundamental questions about using the LCD screen in complex Arduino projects when we need to save some of the available pins. A simple and inexpensive I2C adapter will allow you to connect a 1602 LCD screen taking up only two analog pins. In many situations, this can be very important. The price for convenience is the need to use an additional module – converter and library. In our opinion, it is not a high price for the convenience, and we highly recommend to use this feature in projects.