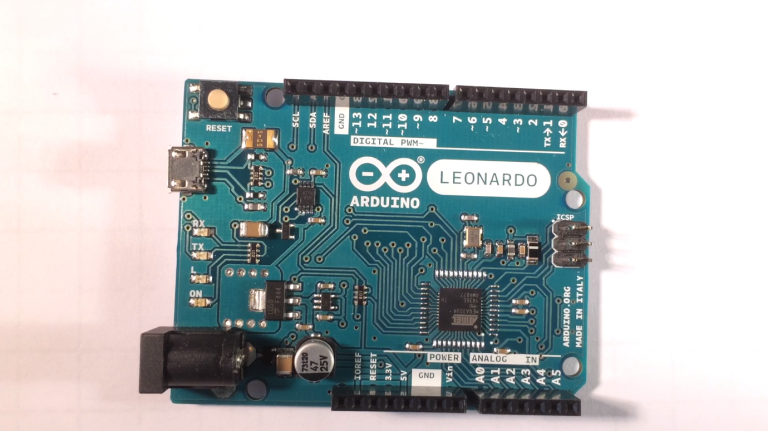 Arduino Leonardo is a platform based on the ATmega32u4 microcontroller. With this board, you can create projects where the Arduino device actively interacts with the computer and acts as a familiar peripheral – mice, keyboards, and game controllers. In contrast to the well-known board Uno, this model has a number of features. In this article, we will learn what they are. You can find a description of the characteristics, pinout, and connection features to the Arduino IDE.

Description of the Arduino Leonardo Board

The Arduino platform allows you to create a wide variety of autonomous devices, but when you connect traditional boards Uno, Nano, Mega, it was impossible to make them work as usual peripherals – for example, mice or keyboards. You can’t just connect a regular joystick through the Arduino Uno to the computer and control it. For example, the cursor – you have to install an application on the computer itself, which will interpret the codes from the serial port and set the cursor in the right place.

The Arduino Leonardo board greatly expands the possibilities for connecting Arduino to the computer. It is treated by the computer as a standard HID device and can directly send the desired control signals. We can’t say that this board can replace Uno, but it can become the basis for new, very interesting, and unusual projects with its unique features. 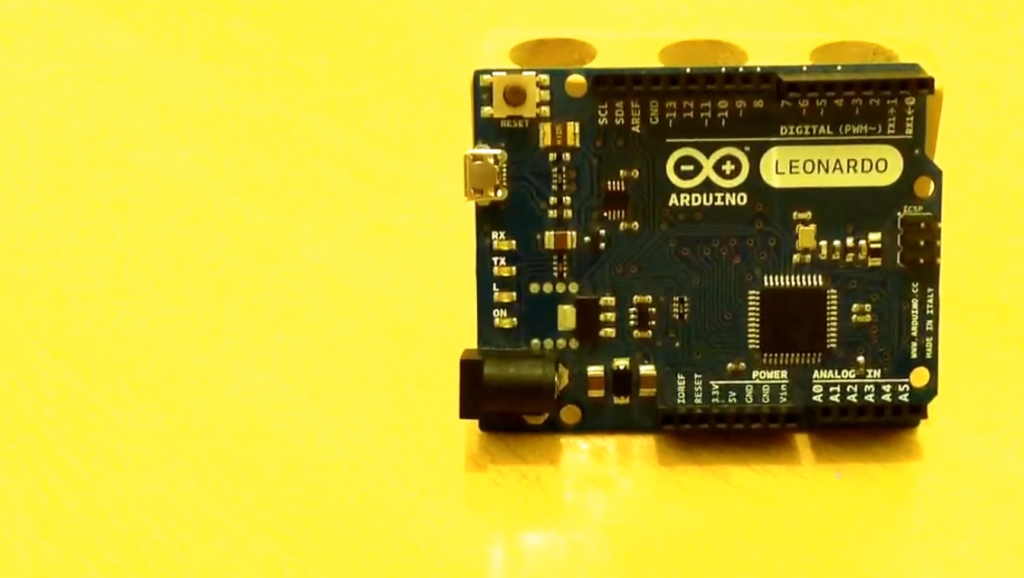 At the core of Leonardo is a quite advanced ATmega32u4 microcontroller. The board itself looks pretty much like Uno. You can find two dozen inputs and outputs, a micro-USB connector, a reset button as well as ICSP connectors, and power input. The board’s power supply is standard for Arduino, with a recommended voltage of 7-12 volts.

Features of the Arduino Leonardo board (some of them are common to all ATMega microcontroller-based devices):

On the whole, the board looks quite traditional, but the board connectors deserve special attention, on which we will dwell in detail.

Before connecting, it is important to present the Arduino Leonardo’s pinout and understand the intricacies of connection. 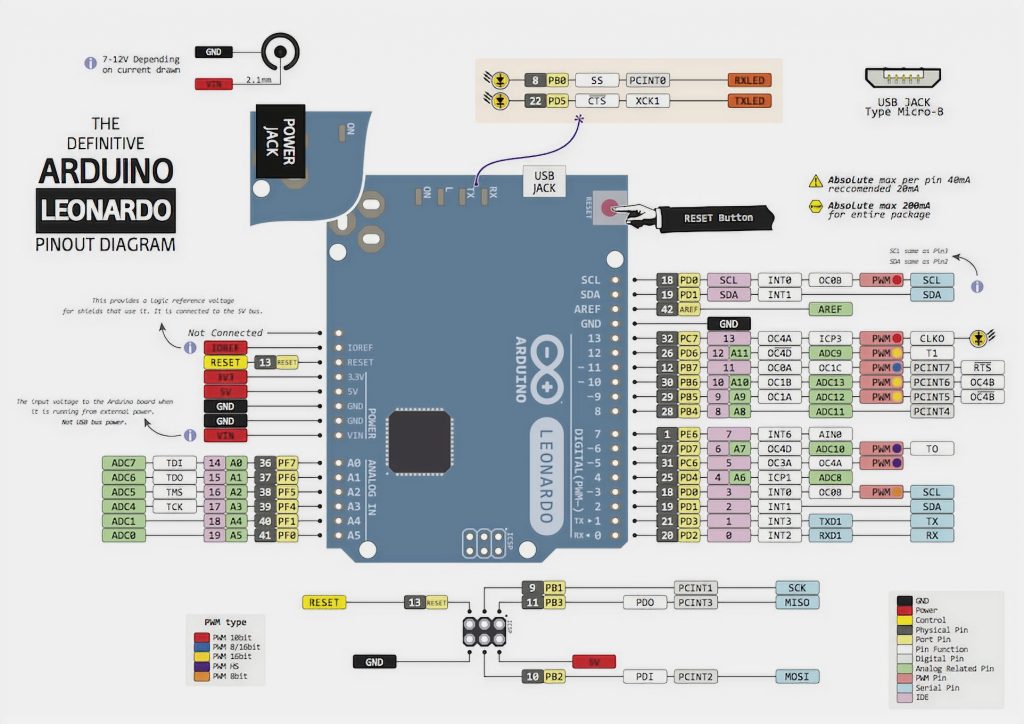 On the Arduino Leonardo R3 board, there is a group of LEDs, by which you can judge whether the device is working or not:

Additional connectors include micro-USB, a connector for external power supply from 7 to 12 volts, as well as ICSP connector. The latter is used for programming the microcontroller.

Connection and Firmware of the Arduino Leonardo

Connecting the device requires a USB cable connected to a PC or a power supply from an external source. This can be a remote battery or an AC/DC type adapter. This solution made the controller cheaper to produce and increased the flexibility to use with a PC. 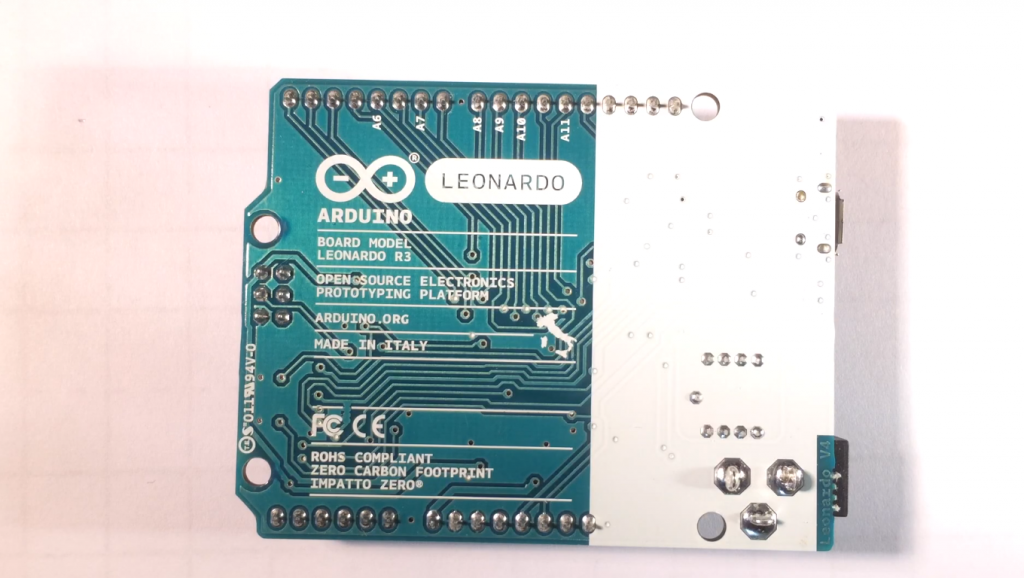 When installing the Arduino Leonardo driver, you need to proceed as follows:

To flash the device, it is enough to press the Upload button to load the software into the memory of the device automatically. Then, the controller’s reset is initiated, which leads to the bootloader start (responsible for receiving, saving, and starting the new software). Unlike other models here, after the automatic reset, the platform waits for a new serial port. Then the sketch is sent to the newly created COM port. If the auto-reset does not activate for some reason, you need to do the following:

These actions are necessary if the standard firmware system did not work.

Unlike its predecessors, the Arduino Leonardo board runs on just one chip. It has an independent USB connector. It is based on the ATmega32u4 microcontroller, which has more functionality compared to the Mega, Nano, and Uno.

The Leonardo model has more RAM, more PWM inputs. But the main change is the ability to connect the device via a USB connector, which significantly increased the platform’s connectivity and functionality.