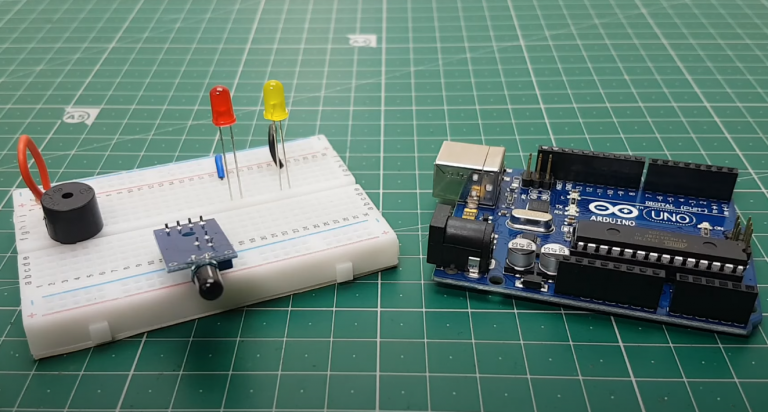 In this tutorial, we will learn the connection to Arduino Uno, a very unusual sensor, which is designed to help us detect a flame!

How Does an Arduino Flame Sensor Work?

Arduino’s fire sensor is produced in two versions – with three or four contacts, and the flame sensor pinout is located in the picture below. Both options have a digital output — the fire sensor switches on an indicator. The output shows a truth signal (logical unit) if a flame is detected and a lie (logical zero) if there is no flame within the infrared receiver’s visibility.

The four-legged flame sensor has an additional analog output, which reports a signal’s presence and its characteristics. In this way, the sensor can detect not only the presence of an open flame but also its scale. The IR sensor reacts to radiation in the range of 750 – 1100 nm. In practice, the sensor reacts not only to fire but also to the sun or incandescent bulb. 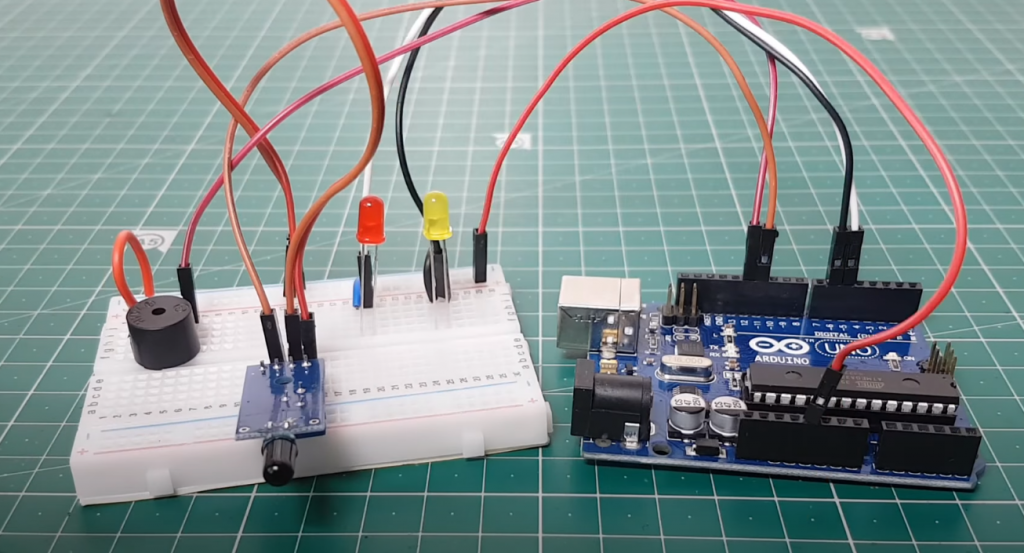 In addition to the IR receiver on the module is placed a substring resistor to calibrate the sensitivity of the sensor and other radio elements with the designation. The scheme for connecting the sensor to the Arduino board is located in the picture below. In the examples, we use the A1 port as a digital and analog input. In the sketch, you can change the port and use it for signal processing any microcontroller.

The flame Sensor is used in robotic firefighters. For these robots are arranged whole competitions, participants’ task is to find and extinguish the fire in a maze.

Our fire sensor will allow us to create a simple and effective firefighting robot for such competitions in the future.

Infrared sensor fire captures the radiation in the range of 760 – 1100 nm, typical of a candle flame. In practice, this sensor reacts to the flame and the sun and even to room lamps. The photodiode should be covered with an opaque material on the sides to avoid parasitic light. For better filtration of foreign light sources, a low-frequency detection algorithm is used when detecting flame with this sensor. This is possible because a candle’s flame changes its intensity with a frequency of 15-20 Hz.

The digital fire sensor that we connect has only three outputs:

Vcc and Gnd sensor we connect to the corresponding pins Arduino Uno, and Out throw on any free leg. In our case, connect Out with digital input number 2. The basic connection diagram looks as follows. 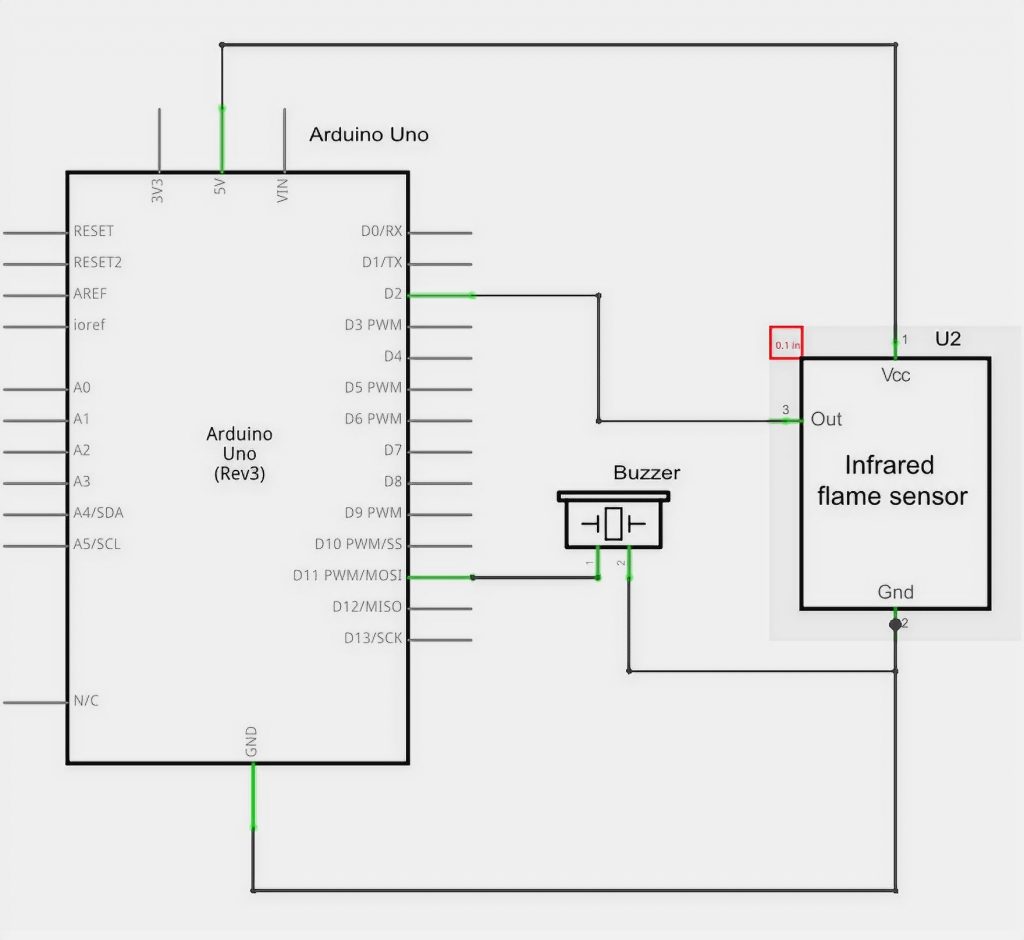 Appearance of the template 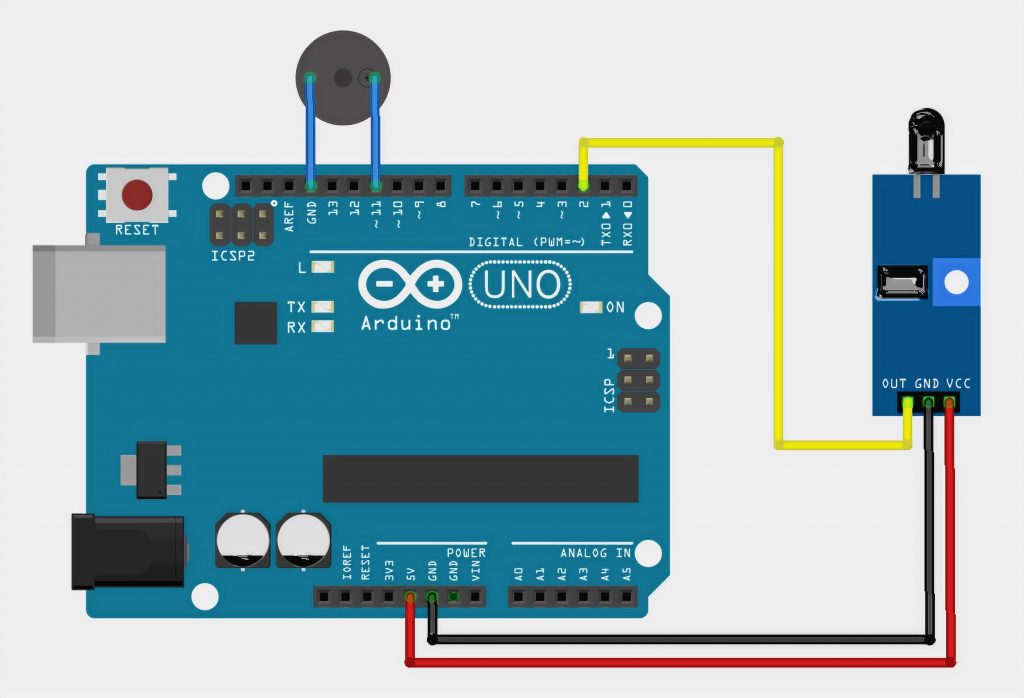 Now that the sensor is connected, you can safely write a code!

Explanation of the code

Explanation of the code

We have assembled the simplest fire alarm system that reacts to infrared flame radiation. By adding the sensitivity setting and hysteresis, you will get a very useful device in your home.