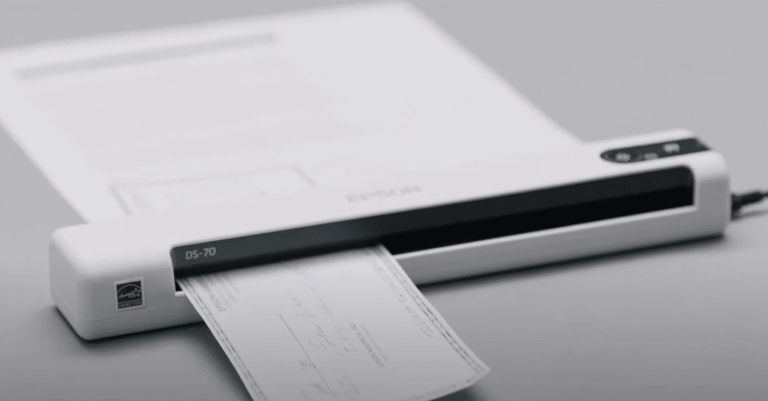 Is a Scanner an Input or Output Device? Easy Explanation

A scanner is a mechanical device that allows you to convert various objects (text, images, photos, documents) into a digital format (more precisely, into a picture). The file obtained by scanning can be saved in your computer’s memory.

The scanner is an input device.

What is an Input Device?

Input devices – peripheral (additional) equipment designed to input information into the computer for further storage and processing. Information entered on the electronic device can be in different formats: numbers, texts, images, sounds. Input devices convert these formats into a digital form perceived by the computer (numerical, text, graphic, audio, and video information).

What is an Output Device?

Output devices are technical computer hardware that allows you to display digital information in a human-readable form. The main output devices are a monitor, printer, plotter speakers, headphones.

Why is a Scanner an Input Device and Not an Output?

A scanner is an input device, which means that it is a piece of hardware that collects information from an object and converts it into a form that the computer can read. The object being scanned by the scanner is in an input machine and lets the computer know what to do with it. The scan (which also refers to a digital copy) of the object then becomes an output.

How Does a Scanner Work as an Input Device?

Scanners are a lot like digital cameras. In both, images are produced by recording light reflected or transmitted by the original object. Flatbed scanners use light reflected from a photograph to read an image, just as a digital camera produces a portrait or landscape by recording light reflected from a person, mountain, or tree. The scanner uses light that passes through the film to digitize the film. The same thing happens when you photograph any translucent object, such as a dirty window pane in a digital camera. At least from this point of view, the principles of scanners and cameras are similar in many ways. 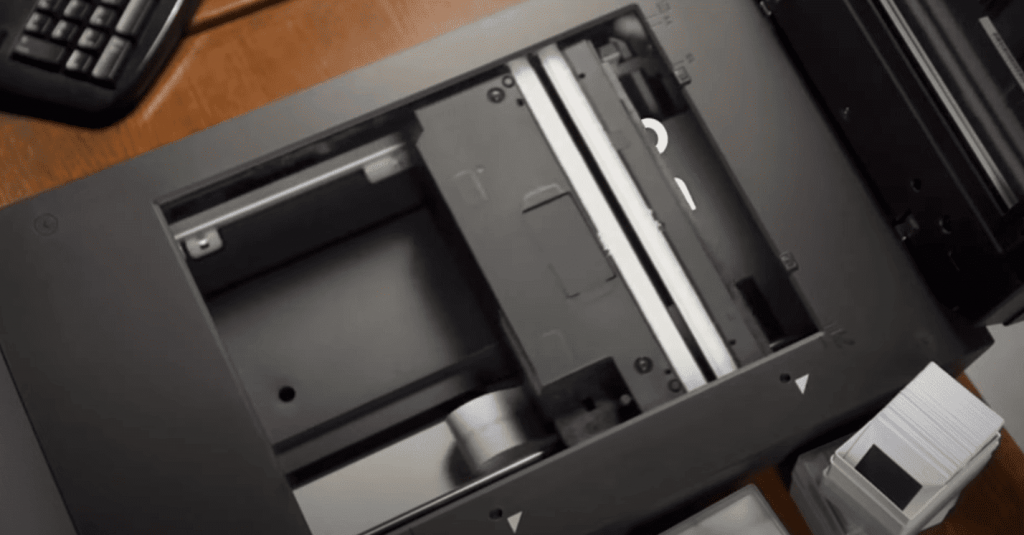 Nevertheless, the two devices differ when it comes actually to recording the image. Except for some special studio models, digital cameras instantly take the entire image, using an array of sensors with a given number of pixels in width and depth (e.g., 2048×1536 pixels). Scanners, on the other hand, scan (pardon the tautology). Their sensors consist of a single row of light-sensitive elements that scan one line of dots in one pass, and then they run through all the lines in sequence until the entire image is read.

There is much less difference between flatbed scanners, which can scan film, and special scanners designed to handle film. Both types of scanners work on the same principle and differ from one another mainly in the physical arrangement of the parts inside the scanner.

Flatbed scanners are the most common family of scanners, found at home and on a professional’s desk. The original is placed on the glass, under which the optical unit moves, and is pressed against the glass by a cover or slide module. Some models, whose optics have a significant depth of field and are equipped with autofocus, can handle three-dimensional originals. 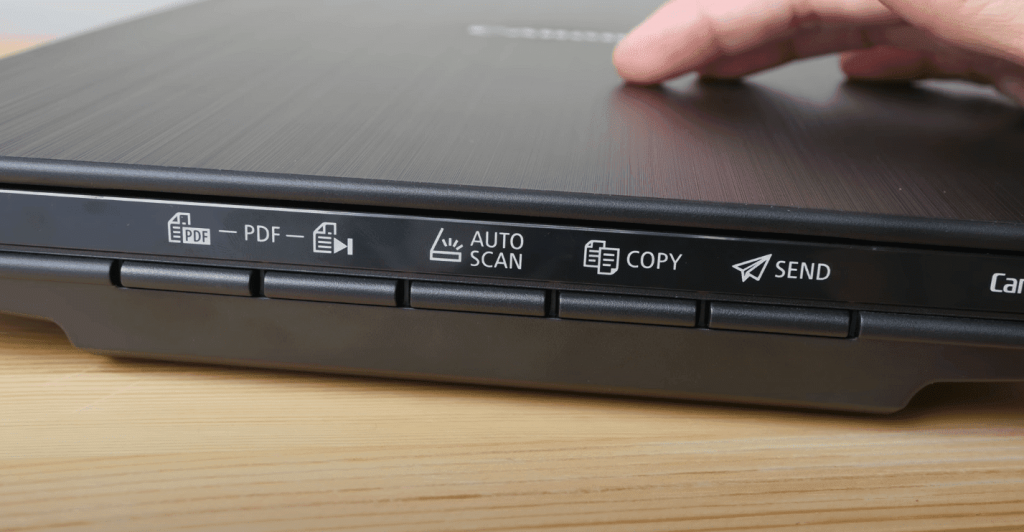 Some models are equipped with a built-in tray for scanning slides. This provides a distinct advantage over the classic slide module, installed instead of the scanner cover: the light passing through a transparent original does not pass through an additional glass and is, therefore, less scattered.

The flatbed scanner is the most versatile tool, suitable for most tasks. The models of reputable manufacturers are unpretentious and reliable, easy to install and use. The variety of produced modifications allows you to pick up the scanner for almost any means and requirements. 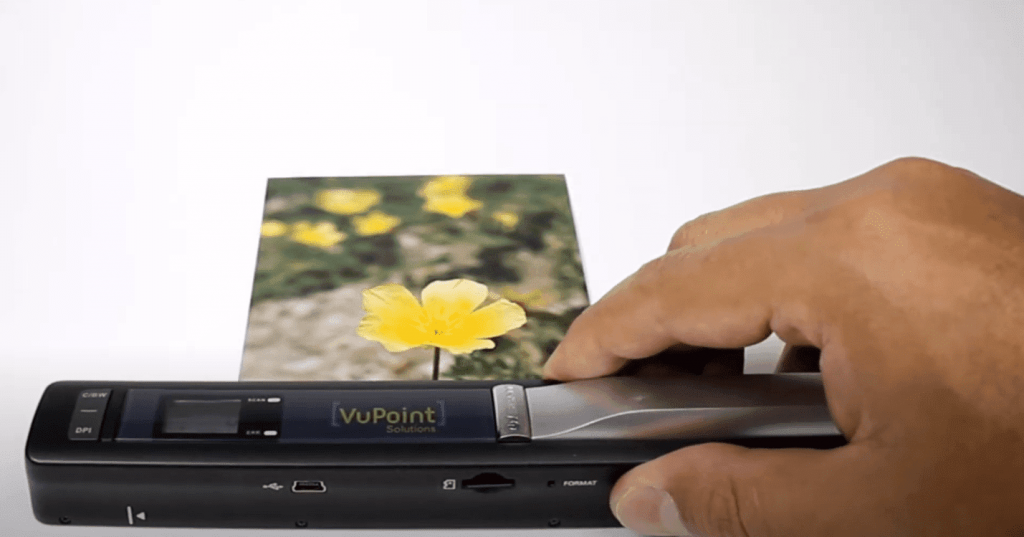 In order to enter a document into a computer with a handheld scanner, it is necessary to move the scanning head over the image without sudden movements. Thus, the problem of moving the scanning head relative to the paper is entirely up to the user. The uniformity of the scanner’s movement significantly impacts the image’s quality entered into the computer. Some models have a special indicator to confirm normal input. There may be a situation where the width of the working area of the hand scanner is not enough to work with the document. In such cases, two side-by-side strips of the original document are scanned, and then special programs are used to “glue” these images into one. If there was an accidental deflection of the scanner from the line of motion, some of these programs can rotate the image in the right direction by several degrees. More advanced systems also calculate small rotations of the stripes and “glue” them together.

This type of scanner is designed for highly professional use. In drum scanners, the original – a flexible sheet with an image – is attached to the surface of a transparent cylinder (drum, hence the name), rotating at high speed (from 300 to 1350 rpm) using a special tape or oil, and the scanning receiver reads the image pixel by pixel with high precision. When scanning transparent originals, a light source is located inside the drum, and when scanning reflective originals, a light source located outside the drum is used. 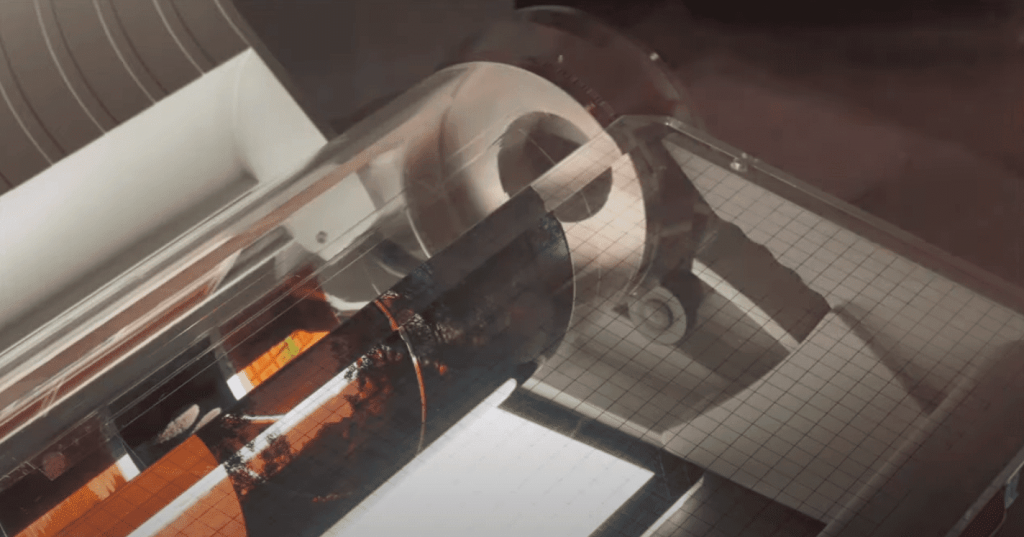 The optical resolution of image drum scanners can reach up to 24000 PPI (pixels per inch). Since the rotation speed of the drum is high, it is possible to focus an extremely powerful light source on the image source without any risk of damaging the original. The brightness of the light source, the ability to adjust the focus, and the element-by-element sampling technology ensure a good signal-to-noise ratio and accurate image tones without crosstalk from neighboring pixels.

Drum scanners are expensive (from $20000 and above). Still, they produce images with a high degree of detail that can be used for subsequent retouching, color separation, and, finally, the formation of the final version of the representation of the publication page or film for making the printing plate (for offset printing).

Leaflet scanners – by design and operating principle- resemble an ordinary fax machine or a machine for checking the authenticity of banknotes. The original is pulled inside by special rollers and scanned as it passes a light-sensitive matrix.

Simplified versions of these scanners are used in offices to recognize text and scan simplified graphics such as business cards and letterheads and are paired with a fax modem to send fax messages. Special models are used in medicine to digitize X-rays and medical records.

These scanners’ low cost and compact size make them a good investment for a paperless office, but scanning from a book or magazine is difficult. Many models are equipped with a document autoloader or can be detached from the stand so that the scanner can be rolled on a horizontal surface to overcome such difficulties.

You have to be careful with these scanners – these models are often quick to jump off the table, and then it can be challenging to catch them, especially if the scanner is not tethered with a cord and the data is transmitted via the infrared port.

The advanced deep auto-focus technology built in the planetary scanner allows digitizing originals with high quality regardless of their thickness, format, and degree of decrepitude. The non-contact scanning method avoids damage to the original material during the digitizing process. 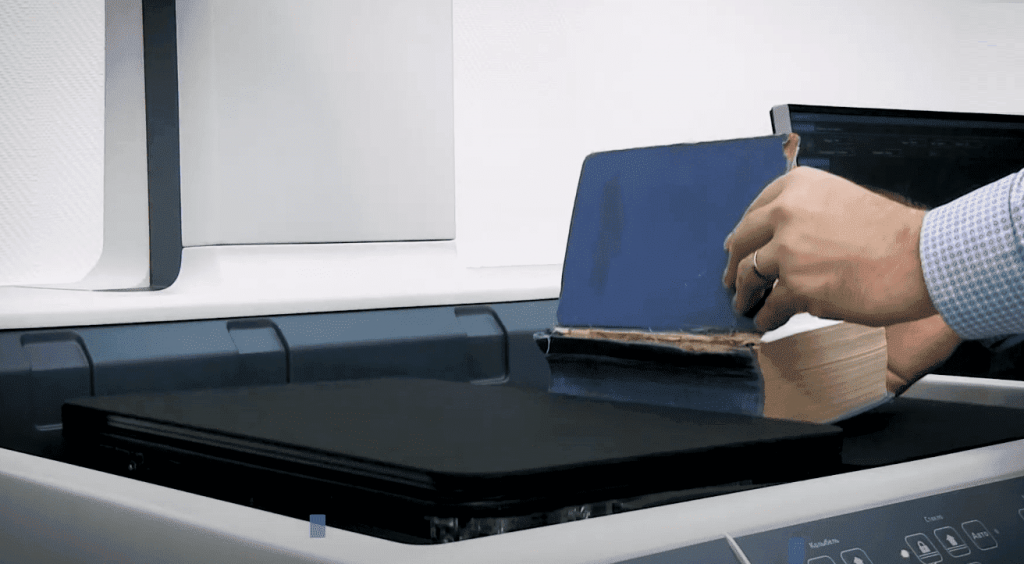 Scanning in grayscale mode dynamically binarizes the image with maximum preservation of document details. It compresses the output data by hardware, converting it into the industry-standard TIFF G4 format.

Image formats are available for grayscale (256 grayscale) or color scanning. The color and grayscale modes ensure the photographic quality of the scanned image. Thus, the resulting files are adequate for the tasks of archiving and auto-recognition, even of damaged and low-contrast originals.

The scanning unit and special software allow high-quality copies of different originals quickly and with a minimum of operator intervention. The software supplied with the scanner allows batch scanning and image processing for further use in document management systems.

Slide scanners are a specialized version of a flatbed scanner designed to digitize slides and negative film for professional photography or printing applications. The slide or film is inserted into the receiving slot and moved between the illumination lamp and the lens. The output image parameters are sufficient for a photo book or print reproduction. These scanners often come as part of a digital photo studio or designer’s workstation. The resolution of slide scanners is up to 3000ppi, and the color bit rate is 42bit. 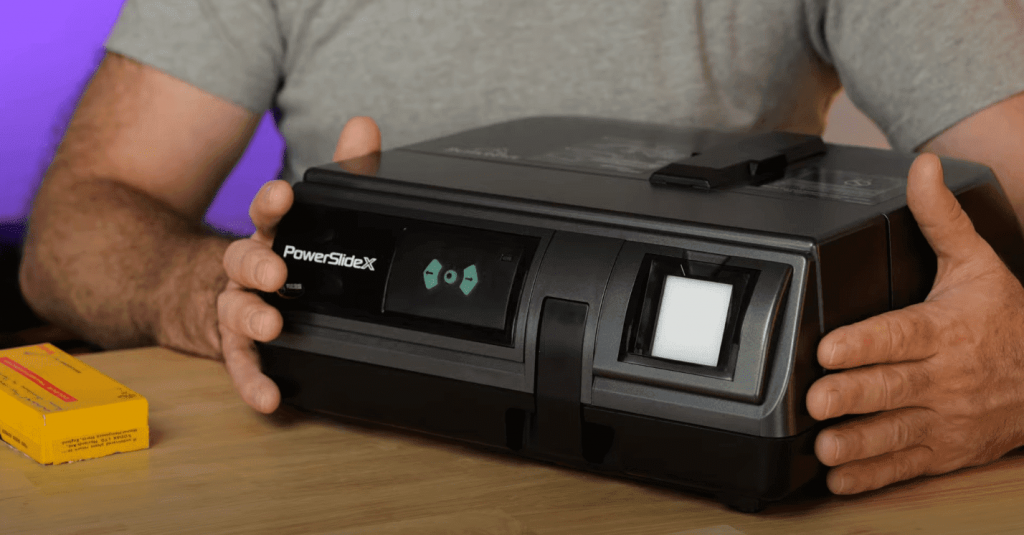 Slide scanners are designed for scanning transparent originals – slides, films, and transparencies. Most slide scanners come with one or more frames in which slides of different sizes, types, and film fragments are placed. Thanks to the batch scanning option, you can digitize your slides in batches of 50 without any operator interference.

The main advantage of slide scanners is their high optical resolution: even the cheapest ones have a resolution of at least 2000ppi.

Barcode scanners – devices that can read information from marking goods in a bar code and send it to a computer or POS terminal.

The existing classification of scanners divides them primarily by the type of performance (stationary, handheld, combined) and by the type of backlighting (requiring no backlighting, LED, laser). The last two types, in turn, are divided: laser ones into single-beam and multi-beam (multi-planar), LED ones into contact and non-contact. There are also other ways to classify them, taking into account certain characteristics and functional features of these devices (scanning speed, the ability of autonomous operation, reading distance, etc.).

While choosing one scanner or another, it is essential to remember that the most expensive and rapid scanner is not necessarily the best choice. Each scanner is designed for a specific model and operation format, and, naturally, supermarkets need quite different devices than boutiques.

How Does a Scanner Get Connected as an Input Device to a Computer?

To connect a scanner as an input to a computer, first, you need to plug the power cord into the wall socket and then into your scan. You also need to plug the USB cord from your scanner into an open USB port on your computer. Once the USB has been plugged in, switch your scan on by pressing the button on top of it for at least ten seconds until it beeps twice (as common).

Where Can a Scanner be Used as an Input Device?

Scanners can be used in various places, including restaurants, schools, hospitals, and offices. They are considered to be input devices because they can be used to input data into the system or send information from one system to another.

Input Devices Similar to a Scanner

Other input devices similar to a scanner include, but are not limited to:

Can a Scanner be Used as an Output Device?

A scanner is an input device that converts physical images into digital images. It scans the image and converts it to a digital image so that anyone can view it on a computer or mobile device. Scanners are mainly used for scanning documents, photos, barcodes, and artwork to create digital files.

Related Video: How Do Scanners Work?

A scanner is typically considered an input device because it enables people to enter data into a computer without typing every detail of the document.