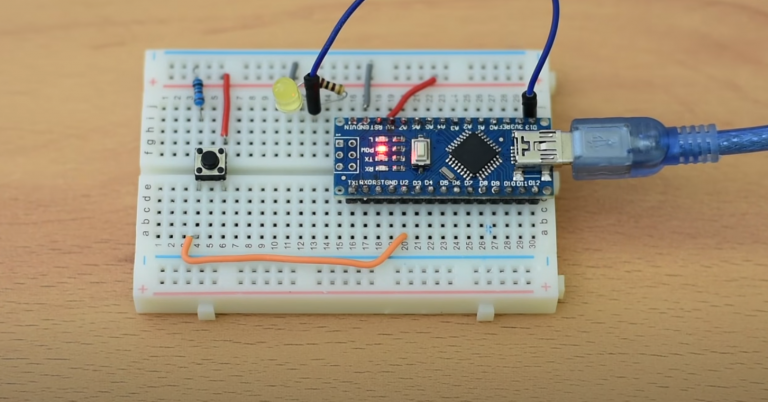 Interrupts are a fundamental Arduino mechanism that allows external devices to communicate with the controller when different events occur. By setting a hardware interrupt handler in the sketch, we can respond to the button turning on or off, the keyboard press, the mouse press, the RTC timer ticks, the reception of new data via UART, I2C, or SPI. This article will learn how to interrupt work on Arduino Uno, Mega, or Nano boards and give an example of how to use the Arduino attachInterrupt() function.

An interrupt is a signal that tells the processor that an event has occurred and needs immediate attention. The processor has to react to this signal by interrupting the execution of the current instructions and passing the control to the Interrupt Service Routine (ISR) handler. The handler is a function we write ourselves and put there the code which should respond to the event.

After handling an ISR interrupt, the function finishes its work, and the processor happily returns to the interrupted activity – it continues to execute the code from where it left off. All this happens automatically, so our task is to write an interrupt handler without breaking anything without making the processor too often distracted by us. We need to understand the circuitry, the principles of the connected devices, and how often an interrupt can be triggered, the peculiarities of its occurrence. All this is the main difficulty of working with interrupts.

Interrupts in Arduino can be of several kinds:

Why Do We Need Hardware Interrupts?

Interrupts are helpful in Arduino programs because they help solve timing problems. For example, with UART interrupts, you don’t have to keep track of every character coming in. An external hardware device signals an interrupt. The processor immediately calls an interrupt handler, which captures the symbol in time. This saves CPU time that, without interrupts, would be spent checking the status of the UART. Instead, all necessary actions are performed by the interrupt handler without affecting the main program. No special features are required from the hardware device.

The main reasons why an interrupt needs to be called are:

How Interrupts are Handled in the Arduino

When an interrupt signal is received, work in the loop() is paused. The execution of the function that is declared for execution at the interrupt signal starts. The declared function cannot accept input values and cannot return values when it terminates. The code itself is not affected by an interrupt in the main program loop. The standard attachInterrupt() function is used to handle interrupts in Arduino.

Differences in the Implementation of Interrupts in Different Arduino Boards

Depending on the hardware implementation of a particular microcontroller model, there are several interrupts. The Arduino Uno board has two interrupts on the second and third pins, but if more than two outputs are required, the board supports a special “pin-change” mode. This mode works by changing the input for all pins. The input change interrupts mode because interrupts can be generated on any of the eight pins. Processing, in this case, will be more complicated and longer because you will have to keep track of the last state on each of the pins.

On other boards, the number of interrupts is higher. For example, the Arduino Mega 2560 board has six pins that can handle external interrupts. For all Arduino boards, when working with attachInterrupt(interrupt, function, mode), the argument Interrupt 0 is connected to digital pin 2.

Interrupts in the Arduino Language

Now let’s get practical and talk about how to use interrupts in your projects.

The Syntax of attachInterrupt()

The attachInterrupt function is used to handle interrupts. It connects an external interrupt to the interrupt handler.

You can set the following options for interrupt conditions:

When working with interrupts, you must always consider the following significant limitations:

Let’s get practical and take a look at a simple example of how to use interrupts. In this example, we define a handler function that, when the signal on pin 2 of the Arduino Uno changes, switches the state of pin 13, to which we traditionally connect the LED.

Let’s look at some examples of more complex interrupts and their handlers: for the timer and the buttons.

Button-press interrupts have the problem of chattering – before the pins make firm contact when the button is pressed, they’ll flutter around, generating several triggers. There are two ways to combat the debouncing – hardware, i.e., by soldering a capacitor to the button, and software.

To get rid of the chattering, you can use the millis function, which allows you to measure the time elapsed from the first actuation of the button.

This code allows you to remove the chattering and does not block program execution as with the delay function, which is not allowed in interrupts.

The timer and interrupt timer allows you to perform an interrupt once per millisecond. The Arduino has three timers – Timer0, Timer1, and Timer2. Timer0 is used to generate interrupts once every millisecond. It updates the counter, which is sent to the millis() function. This timer is eight-bit and counts from 0 to 255. An interrupt is generated when the value reaches 255. The default is to use a clock divider of 65 to get the frequency close to 1 kHz.

Comparison registers are used to compare the state on the timer and the stored data. In this example, the code will generate an interrupt when the value 0xAF is reached on the counter.

Interrupts in Arduino are a difficult topic because you have to think about the whole architecture of the project, imagine how the code runs, what events are possible, and what happens when the main code gets interrupted. We didn’t want to cover all the features of this language construct. Our main goal was to introduce you to the main ways of using it. In future articles, we will continue to talk about interruptions in more detail.